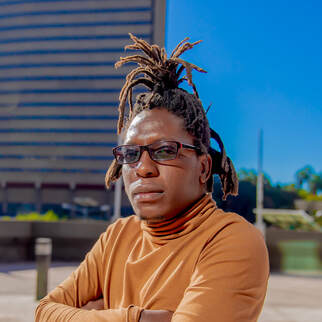 At 34, Wycliffe Mundopa, has been making art for almost twenty years, having determined that he was born to be an artist at age 15 on a visit to an artist studio. Entering his second decade as a professional artist, Mundopa is one of Zimbabwe’s most recognised and successful painters. Firmly rooted in and committed to being a present witness and advocate of the country’s turbulent contemporary life.

As most aspiring artists, Mundopa’s practice began through drawing and documenting that which was most accessible – the people and places around him. Yet it became very quickly apparent that the lives of people he was drawing, were not apolitical and neither was the act of making their lives visible and tangible through art. From his teenage years and through his twenties, Mundopa was living and working in Mbare – a dynamic and colourful township with strong history in the independence struggle. A road-port for traffic through the country and the region and a crucible for political discourse and popular political sentiment.

By 2011, Zimbabwe has emerged from the crisis of hyper-inflation, which decimated the country’s economy between 2006 and 2008, however it emerged scarred, with those most vulnerable in society left largely to fend for themselves with no social provisioning and few job or educational opportunities and largely ignored by political gameplaying of those in power. It was at this juncture, while many Zimbabweans including artists, were leaving the country for greener pastures in South Africa or UK, that Mundopa made a clear a conscious and critical choice to remain.

For Mundopa the intimate, the personal and the vulnerable became deeply political and continues to be so until today.  I remember a group conversation about artist lives and practices at Chinembiri studios he established with Zacharaha Magasa, where the usual taciturn Mundopa raised his voice and pronounced “This suffering is what makes us. I need to be here and be part of what our people and our country goes through.” These were not trite words. At the time, to be an artist in Harare, meant real hardship, with next to no access to materials and scant market for selling art work and almost non-existent alternative sources of income.

Faced with lack of access to proper art materials Mundopa turned to stencils and collage, a paper-based practice which enabled him to keep making work and progressing despite obstacles. It was only in 2013 that he could start working properly in oils and see his practice explode with colour possibility and in size, in ways that continue to develop.

As opportunities expanding so did the dramatic and intellectual spectrum of his works. His subjects, which started as real models begin to emerge as symbolic and allegorical figures of speech and cultural significance, politicised protagonists projecting from the canvas to challenge the viewer. Using the dichotomies of anger in beauty and beauty in the pain, Mundopa also enables us to emerge from the dichotomy of looking and seeing. Not only do his mythologised but dramatically real subjects they compel you to see them, they challenge you to question the way you look and see moving between didactic and heroic as though that was a natural oscillation.

Over the decade, while the sense of determination in the work is unwavering, Mundopa’s confidence in grappling with the world matured into insight and wisdom, as well as engagement with history of painting writ large. His imagery is audacious and unapologetic, bridging vernacular visual metaphor or Harare street slang with classical genre painting compositions of Dutch masters and post-impressionistic verve in line and colour. His works are aimed at and do stake a claim in defining Zimbabwean art and art historical narrative.

This long look at the path travelled over the past decade not only projects the robustness of Mundopa’s strength as an artist and the depth of his foundations for an expansive flourishing practice going forward. It is also a counterpoint to the limitations of art market narratives around contemporary African art.   This is because, despite decades in the making the international art world, contemporary art from the continent is still defined by the discourse of discovery and arrival. This paradigm focused on newness creates a perception frozen in time. Where artists’ practices exist in that singular moment of the encounter with non-African audience. This is a PR driven ahistorical model, which short-changes audiences as much as it precludes the artist from the possibility of growth and development. This is particularly and spectacularly significant for young, emerging, who have been the focus of market attention and knowingly or unwittingly, willingly or unwilling have been trapped in a cage of success. While this is also true for non-African emerging artists, the situation for African emerging artists is underscored by historical power inequalities and disempowerment of emerging from underdeveloped art sector infrastructure.

In this context, “What Makes Us” is more than a personal exhibition concept. It stands as a statement of intent by Mundopa to engage with global art history as a peer. It is also an invitation for other African artists to assert themselves in the same way.