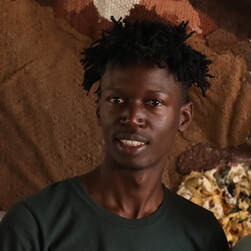 ​
Troy Makaza is one of the most original Zimbabwean voices to emerge in the past decade. To merge his love of painting in sculpture he invented his own
medium, creating seductively bright and tactile silicone infused with pigment surreal wall works. Bridging the visceral and philosophical, personal and political is in. A born free Zimbabwean but also a millennial Makaza sees his work as exploration and reconciliation of competing cultural, historical and political ideologies in Zimbabwe and globally. His works defy categorization, oscillating between weaving, sculpture and painting, physical and surreal, they compel visually and conceptually to shift our paradigm of engaging with the urgently contemporary in African art.

Dispatches from Zambesia, is a suite of brand new silicone-based wall works by Troy Makaza. These works form Chapter 5, the closing changer, in Neverland, Makaza’s evolving narrative articulating history and politics of Zimbabwe through colour-based coding reflecting the contemporary and traditional idioms of Zimbabweans. In his work, Makaza straddles the concept of critic and advocate, as a young locally based but globally engaged citizen, who is aware of the difference in the way local and international audiences engage with his work and staking a claim for an authentic and critical voice in contemporary art.

This project began in November 2017 with Chapter 1- Camo: Division of Labour, parts of which were exhibited at Zeitz MoCAA as part of ‘Five Bhob’ exhibition in 2018. In Camo the terse combination of the colours of the military and the civil normally separated by politics, responding poetically and optimistically to the events of November 2017, when in a dramatic turn of events, the army and the people came together as a united force to achieve the removal of Robert Mugabe from power after 37 years.

Chapter 3: Visceral Politics, was presented as a solo exhibition at Primo Marella Gallery in Milan and dealt with food production and consumption in Zimbabwe as a metaphor for the interplay between power, land and class in a country where land is both a source of pollical power and legitimacy as well the core means of survival. The trip to Italy for Visceral politics, became a catalyst for a nuanced reflection on history and legacy of colonialism. Visiting Venice, just as the historic aqua alta was coming in, impressions of drowning beauty and opulence, turned to how history will remember us and our civilisation and led to development of Chapter 4: Remembering Byzantium series as a rumination on the past but also the current precipice we are facing on a global scale. They also introduce St Tura the fictional Zimbabwean saint ‘you’ as a Westerner do not know about even though you are used to knowing everything.

These are the ideas forming the matrix from which Chapter 5: Dispatches from Zambesia emerges. Zambesia was one of the early proposed names of Zimbabwe post Rhodesia. A name which was never to be used with ideas for a place, which equally does not exist and also could not exists. These works articulate the danger of mythologizing history or future, no matter how delightful it might be. Playing with ideas of mapping, geography, land use but
transposing them into a mythical world which is not too far from ‘tangerine trees and marmalade skies’ of Lucy in the Sky with Diamonds – a dreaming which while local is also enmeshed with our shared humanity, which pushes us towards hope because and not in spite of cynicism all around.

The playful and fluid approach to delivering an ideologically passionate and focused narratives in his work, is a deliberate device, Makaza uses to give audiences their own space to engage with the work in ways which are not prescribed or proscribed. He borrows widely yet subtly both from popular visual culture, traditional symbolism and art history as a source of his synthesised agglomerations, where colours and forms become the prime actors in the
works.

Dispatches from Zambesia is tour de force of energy which speaks to a consciousness of the need towards a holistic and compassionate reconciliation of human kind with its history and the environment but also passionate optimism for this possibility.