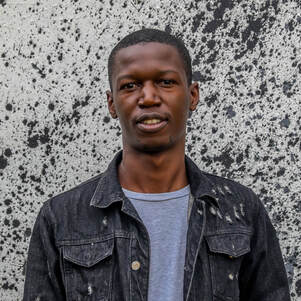 Curated by Magali Arriola, Director, Museo Tamayo, Mexico City; Christina Li, independent curator based in Amsterdam and Hong Kong; and Larry Ossei-Mensah, Cofounder of ARTNOIR and Curator-at-Large at Brooklyn Academy of Music, New York, ‘OVR: Portals’ will focus on artistic practices that interrogate the parameters that have shaped our contemporary condition, both through current and historical lenses. Together, the featured presentations will address the disconnected realities that arose as a consequence of the events of the past year: the global pandemic, recent political upheavals, and the recalibration of social behavior across the globe.

Troy Makaza’s solo project developed specifically for Portals, is one of presentations specifically addressing key sociopolitical issues of our times - income inequality and the complicity between wealth, capitalism, and patriarchy in the context of the pandemic lockdowns in Zimbabwe.

Titled, “Big Man Syndrome” Makaza’s expansive and monumental new woven and painted silicone wall-hangings focus on the damaging impact of hyper-individualism and machismo, amplified by social media on social progress and connects this to legacy of colonialism in Zimbabwe today.

Makaza’s practice is all about the co-existence of contradictions and making connections between phenomena – historical and social which on the surface may not appear to be related. His materials and execution epitomise this discourse. Industrial silicone infused with pigments, woven painted, cast, and shaped – is almost aggressively public-facing and masculine, at the same time the shaping of the work is fluid, malleable, tactile, and beckons for an intimate engagement in a way that and echoes traditionally feminine practices of weaving and tapestry and even ceramics. This dynamic paradigm is a true born-free voice in gender and social politics of contemporary Zimbabwe and a challenge to the older generation not just from the perspective of patriarchy but also as a critique of the matrix of traditional patriarchy, colonial religious and social domination in the crucible of the post-independence Zimbabwe where the tension between revolutionary and decolonial is

Since 2017 Makaza successive bodies of work have followed a trajectory of analysing the matrix of history, politics, and social relations taking on macro perspectives of historical and contemporary issues around land, ownership, and politics to the micro perspective of diet and food as a reflection of social status, colonial history, and cultural globalization.

In “Big Man Syndrome”, Makaza side-stepping pandemic pandemonium clichés to look at aberrant phenomena which became amplified by social media during the lockdown and in the absence of white noise of daily lives. In particular, the veneration of extravagant and deeply immoral Zimbabwean men, showcasing their decadent lives in the middle of a global as well as country-wide crisis and in a country with extreme income inequality.

As a young man and new father of a daughter Makaza reflects and critiques the destructive culture his contemporaries are seduced by and position it in a broader historical context as an allegory of rampant greed and acquisitiveness of the political classes in Zimbabwe, which in many ways only replaced colonial rulers despite the revolutionary ideals. Ginimbi is also an easily recognisable analogy to the global income inequality, which has reached the levels of desperation driving social protest and social progress movements around the world.

In two key works which give title to the exhibition “Big Man Syndrome” Part 1 and 2 Makaza riffs on symbols of power, which have crossed over from the West through colonial history, from judges wigs to ornate gilded mirror frames and military regalia and soaks them in colours of faded US dollar notes, which are the de facto official currency and also define the objectives and the modus operandi of those in power, regardless of the needs of the people and the land.

Conversely in Steak for Dessert couplet, allusions to food and cattle in contrast to pastel colours of both dessert and verdant fields are metaphoric descriptions of both the wealth of the country as well as women, who are still traditionally paid for by cows in marriage. But as the title suggests, it is also a world where wealth and power are concentrated in the hands of men, with deeply misplaced personal and ethical priorities, who are not only harming those around them but also themselves.

However stark the message, Makaza’s deliberated infuses playfulness and fluidity. He borrows widely yet subtly both from popular visual culture, traditional symbolism and art history as a source of his synthesised agglomerations, where colours and forms become the prime actors in the works, giving audiences their own space to engage with the work in ways which are not prescribed or proscribed.

Makaza’s ‘Big Man Syndrome’ is an intellectually robust and aesthetically poignant reflection on this moment in contemporary history from unique perspective.